Why Do Dogs Chew Everything? 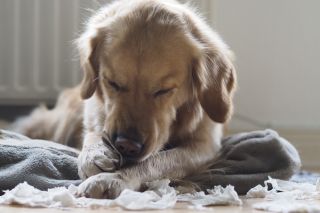 For dog owners, the following scenario may be all too familiar: You get home from a long day of work only to find your favorite slippers in tatters on the floor, scattered pieces of foam torn from the sofa cushions and teeth marks running up the legs of your wooden chair.

Your first instinct may be to scold your four-legged friend, but before you do that, it's important to understand why dogs chew things in the first place.

"Chewing, for a dog, is like a human opening a door and looking into a room," said Colin Tennant, the chairman of the U.K. Canine and Feline Behaviour Association. "People are nosy, and so are the dogs. But they investigate with their mouths, because they don't have hands." [Why Do Breeds Look So Very Different, But Cats Don't]

Tennant, who has worked on dog behavioral problems for 30 years, said that in extreme cases (such as the scenario described above), so-called separation anxiety can make the problem worse. This is the psychological distress that some dogs experience when left alone for an extended period of time.

"Dogs are pack animals. They don't like being left alone," Tennant told Live Science. In particular, "dogs that are not used to being alone can get really anxious when the pack is absent and [can] display damaging behaviors such as chewing or ripping off the carpet," he said.

However, even a well-adjusted pooch may find it difficult to keep its jaws away from certain things around the house, especially particularly alluring objects, such as the slippers.

"Dogs frequently chew things because they like the taste or the odor," Tennant  said. "In a home, the odors that the dogs find the most attractive are the human odors. People leave their shoes about, and the shoes have an intense smell."

Moreover, the shoe texture is particularly inviting for the dogs. It speaks to their wild animal instincts, Tennant said.

"Shoes are frequently made of leather, and that reminds the dog of animals," said Tennant. "Dogs eat animals. They are predators."

Instead, the dog needs to be trained to avoid objects that humans assign value to and needs to be offered alternatives. However, the animal may not automatically accept the alternatives. [Puppy Love: Test Your Dog Breed Knowledge]

"The most common misconception people learn from the internet is that they just need to buy the dog some toys and [the chewing] would stop," Tennant said. "It won't. A toy would smell of plastic, which is not necessarily a pleasant smell for a dog, [whereas] the shoe stinks of a human, which is a fantastic smell [for a dog]. They love it. There is no contest."

That means that it's up to the human to teach the dog to ditch the smelly shoes in favor of the sterile toy. One way to do this, Tennant said, is to use chasing games to reinforce the relationship between the toy and the dog.

"Throwing the toy is a way to teach the dog to find toys attractive," Tennant said. "Dogs are possessive. It's part of their nature. The moment you dash over to take an object away from them, they will run off with it — exactly the same way they would if another dog came over."

Soft, cushy toys appear to be almost as popular amongst dogs as shoes, Tennant added. This is another facet of the dogs' psychology owners tend to dislike, because the easily destroyed toys need to be replaced quite often.

Whatever the dogs chew, it's important to discipline them immediately. Any scolding given after they've stopped the undesired action will have no effect on a dog's future behavior.

"Dogs live in the moment," Tennant said. "If you scream at them half an hour after they destroyed something, the only thing they would learn is that sometimes you act nuts."

And that holds true even if your dog looks guilty when you yell at it. The most harmful misconception is for people to believe that dogs understand the consequences of their past actions, Tennant said. The guilty look confuses owners, but it's there only because the dog doesn't like being scolded, Tennant said.